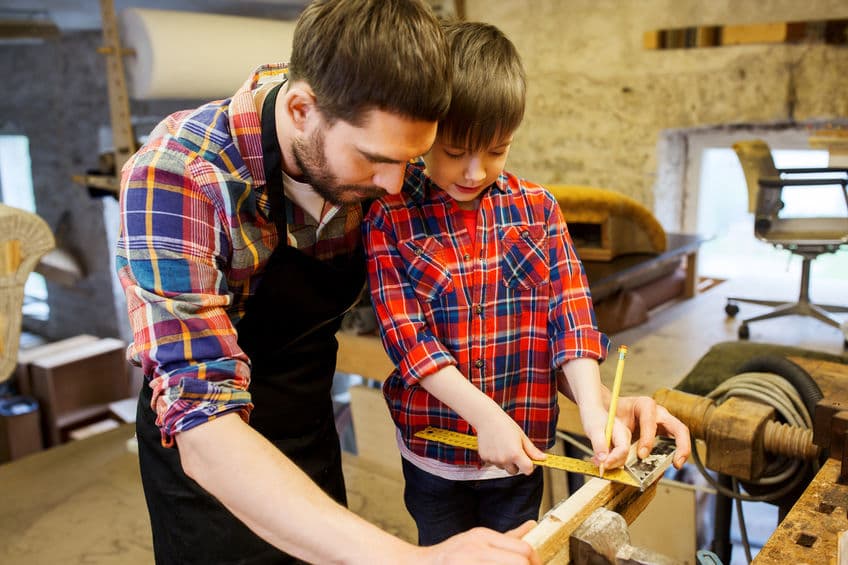 When I meet other solopreneurs, I love hearing about how they got into business. Especially when it wasn’t something they planned to do, but more an action they felt compelled to take based on their life experiences.

That’s how it was for me. If you told me 10 years ago that I would be in business for myself today, I would’ve laughed one of those deep belly laughs that ended with tears streaming down my face. Then when I composed myself, I probably would’ve laughed some more.

Not only did I never feel compelled to start my own one-person company, but I was actually repelled by the idea. I didn’t want the stress and hassle of working for myself.

Plus, truth be told, I didn’t really have the confidence to think that little old me could make a living without someone else issuing me a paycheck. That is, until I was faced with a decision that would change my life no matter which way I decided to go.

A Life-Changing Decision Either Way

At that point, I was in the 14th year of working for the court system near my hometown in the Midwest, and I had a solid relationship with my boyfriend of a year. As far as I was concerned, life was going well. Which is when my boyfriend took me to dinner one night and told me he was offered his dream job. In California. More than 2,500 miles away. And he wanted me to go with him.

To say that my head was spinning was an understatement. Not only would deciding to go involve leaving my family and friends, but what would I do for work? Did I really want to start over and work my way up in another organization? Did I have it in me?

The kicker for me was that this decision was going to change my life no matter what I decided to do. If I made the choice to go with him, I was leaving life as I knew it behind and effectively starting over in unfamiliar territory. If I stayed, I was losing the love of my life. Honestly, I felt screwed either way.

After struggling with the decision for a few months, and with my boyfriend already working in California and I still in Michigan, I ultimately decided that I couldn’t let fear hold me back. I also figured that, if there were ever a good time to start a new career, that time was now.

Since I’d always dreamed of being a writer, that was the path I was going to take. I loved the idea of sharing what I knew about different topics with others. I thrived on the idea that I could potentially help people find the answers to some of their biggest questions by providing them information I’d learned from reputable sources.

It wasn’t easy, building a new career from scratch. However, if I had the opportunity to travel back in time and do it all over again, I most definitely would because now I can’t imagine working for anyone else.

I’m obviously not alone in this regard as there are many others who’ve had experiences that have led them into working for themselves. Even when they didn’t necessarily intend to. Here are a few of them.

Witnessing a Friend’s Murder Leads to a Law Degree

“People often ask me why I got into this profession as a criminal defense lawyer in San Diego,” says Vik Monder of Monder Law Group, yet he says that he chose this particular field after being a key witness to his best friend’s murder.

“I was a pre-med student at one of the top universities with a background in finance before experiencing the loss of my closest friend,” says Monder. “My experience in life drove my passion to represent others who were about to fall victim through the cracks of our justice system, such as faulty eyewitness testimony and professional police-work taking a back seat at the beginning of their cases.”

Monder adds that it was this passion that helped him get through the day-to-day, even when there was no money to be made. “Being an entrepreneur has been a lonely journey but well worth the sacrifice,” he says, crediting his success, at least in part, to his father instilling business ownership in him as a first-generation American. And it has paid off.

“At this stage in my career, I have handled the most high-profile cases in San Diego history and have one of the most successful criminal defense law firms in Southern California,” Monder says. But he has some very important advice for other solopreneurs too.

“The most important aspect in working for yourself is to live your life for whatever pushes you to be your best when you wake up in the morning,” he says, adding, “I believe money follows those that are too busy following their passions in life.”

From Health Issues to Owning Her Own Company

Sometimes it is what happens to our physical selves that pushes us into business ownership. For instance, for Tara Langdale-Schmidt, founder of VuVatech, it was a health issue that led her into creating her own company.

“For four long years, I experienced sharp, stabbing, burning pain in my pelvic area,” says Langdale-Schmidt, “making it impossible to enjoy sexual intimacy with my boyfriend, Jason, who would become my husband. The pain, both physical and mental, was agonizing and impacted my quality of life.”

Initially, Langdale-Schmidt says that her gynecologist told her to just “drink wine and take some Advil before sex.” She also sought help via a pelvic pain specialist who, without even examining her, wanted to put her on an antidepressant for the pain.

“I told him that I did not want to be on medication for this issue and alter who I am as a person,” she says, which is when he snapped at her and told her that he was just giving her all of her options. “He did not even give me a name for my condition,” she says, adding, “I never went back to him.”

Deciding she’d had enough, Langdale-Schmidt felt that it was time to take her medical issue into her own hands. It took her years, but eventually she read an article about Vulvodynia—which the Mayo Clinic states is characterized around chronic pain or discomfort around the vaginal opening, with no apparent cause—and that’s when she realized that this is what she had.

“From my previous positive experience using magnets to reduce back and neck nerve pain after a car accident, I had a ‘lightbulb moment,’” says Langdale-Schmidt. Her thought was to add neodymium magnets into a vaginal dilator.

“With the help of medical experts and advisers, I turned my idea into a nonprescription medical device and startup business,” says Langdale-Schmidt. Since then, her life has totally changed.

“I was bartending when I became an accidental startup solopreneur,” she says. “In the process, I’ve become an unexpected advocate and information source, via my website, for women who suffer from sexual pain.”

Like me, Langdale-Schmidt says, “I wouldn’t change my unexpected journey for anything. It’s been an amazing turn of events, from someone who suffered physical and emotional pain, to a surprising startup solopreneur.” And like many solopreneurs, she doesn’t do it for the money.

“I have seen many entrepreneurs that define success by how much money they have in the bank, the car they drive and the house they own,” says Langdale-Schmidt. “I think differently. I define success by how many women I can help. My main goal is to help women overcome pain and resume normal, healthy lives. Anything monetary will only be a bonus.”

Changing Dreams, Followed by Taking a Leap of Faith

Other solopreneurs know that they want to own their own company someday, but it’s the type of company that changes. At least, that’s what happened with Christopher Haas, founder of Haas & Sons Electric. (The sons is there for futuristic purposes, as Haas is hoping that his adolescent boys want to, one day, take over the family business.)

“Since I was a child, I have wanted to own my own company,” says Haas. Yet, when he was younger, the company he wanted to own was a bicycle shop. Later, after learning the electrical trade, Haas says, “I found my new passion.” And he’s been honing that passion for the past 15 years, working as an electrician in Maryland. Though he didn’t start out working for himself.

Over the course of time, Haas has worked for three different electric companies doing a variety of electrical work. After nine years in the trade, he decided to obtain his electrical Masters License, seeking work with companies willing to pay for his new credentials.

“I found them,” he says, indicating that he soon began to work for a large corporate company. “I made a lot more money here,” says Haas, “doubled my previous income, in fact. But what they don’t tell you is the commitment.”

Haas says that working for this company meant that he was on the road 10-14 hours a day, 5-6 days a week. “No longer did I know what a weekend was,” he says, “as I had to catch up on everything I didn’t have time for during the work week.”

Though it wasn’t easy, it was all of his experiences that helped Haas decide on a niche when creating his own business, that niche being to provide “massive service on a local scale.” He learned a lot along the way too.

“The last company I worked for taught me to slow down, take my time, [and] do the best job I can do every time,” says Haas. “As Mike Holmes from Holmes on Homes says, ‘If you did it 99 percent right, you did it 100 percent wrong.’ I have come to love that motto.”

Now, Haas says he strives to be more than an electrical repairman. “I want to be a true craftsman of the electrical trade,” he says. “I know I can offer the same level of service as the big corporate guys and still be your neighborhood company.”

And Sometimes, Solopreneurship Isn’t the End-All

While people like me want to stay a solopreneur forever, for other people, being a one-person business is just a stepping stone for what lies ahead. “Personally, the ambition to create my own business felt natural to me and was something I always wanted to do,” says Daniel Joelson, Founder, Car Loans of America, but it wasn’t his end-all.

“Looking back on my decision to become a solopreneur, I first thought having employees cost too much money,” says Joelson. “But now, I see that lack of production and failure to expand your business is what really costs money. So for me, eventual expansion is the name of the game and having a footprint in the marketplace.”

Joelson says that there are benefits to having employees, such as being able to compete with larger companies. “Also, as a solopreneur, it is impossible to take any time off for the holidays or go on vacation because when you leave, the business stops,” he says.

However, he also quickly adds that these aspects aren’t intended to dissuade others from becoming a solopreneur. More so, they are factors that should be considered before beginning the solopreneurial journey.

Where will life lead any of us? It’s hard to tell. But it can be one hell of a ride, if you let it be. At least, that’s what I’ve found.

The Successful Solopreneur
Should You Start Your Own Business? What One Former NFL Player Has to Say About...

Strategizing
Why You Need to Hire Swiss Nominee Director Services